PROFESSIONAL AFFILIATIONS (Past and Present) 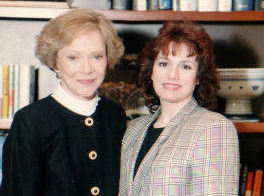 I was also was cited for Excellence in Writing on Women's Health by the New York Metropolitan Chapter of the American Medical Writers Association.

My book, Breast Cancer: What Every Woman Should Know (Hearst Books) was cited by the Journal of the National Cancer Institute as an Outstanding Book of 1996 and was honored that same year with a Rose Kushner Award for writing achievement in the field of breast cancer, my second Rose Kushner award.

Among my other honors: a National Media Award from the American College of Asthma, Allergy Immunology, a Leukemia Society of America Award, three Arthritis Foundation Journalism Awards, three William Harvey Awards, and a Media award from the American Diabetes Association, all for WCBS Radio's "Report on Medicine." I was proud to be among the Finalists in the 1994 National Magazine Awards for "Exceptional Families," a special series in Child magazine, and was the recipient of a Consumer Service Award from the National Council Against Health Fraud for "Dangerous Doctors, Phony Cures," in Redbook magazine.

The New York City Department of Health and Mental Hygiene awarded me a Masters of Public Health Scholarship to complete my MPH.

I was the recipient of a Rosalynn Carter Fellowship for Mental Health Journalism to complete a year-long research project into culture and mental health, and was a Science Writing Fellowship at the Marine Biological Laboratory at Woods Hole, Massachusetts to study neuroimmunological diseases on the post-doctoral level.

I earned my Master's degree in Public Health (MPH) from Hunter College of the City University of New York, in Urban Public Health and Community Health Education, with a special citation for academic achievement (GPA of 9.6). I also earned a certification as a Certified Health Education Specialist (CHES) from the National Commission for Health Credentialing.